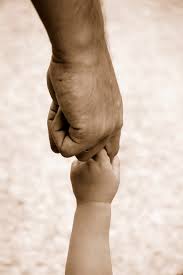 Ok, so the title is a little corny, but it fits.
All of us, with not exceptions, are born into a corrupted word. Since Adam and Eve’s disobedience, we have lived in a “fallen state.” No longer in relationship with God. There are only two families. God’s (the Kingdom of Heaven), and Satan’s (the kingdom of rebellion). Just like in the natural, when we are born, we cannot choose our family. It was decided for us ages ago by our ancestors, Adam and Eve.

But, (here comes the good part), God allows us to choose later in life. His desire is to be our Father and so He gives us the opportunity to be adopted into His family. Galatians 4:4-6, “But when the right time came, God sent his Son, born of a woman, subject to the law. God sent him to buy freedom for us who were slaves to the law, so that he could adopt us as his very own children. And because we are his children, God has sent the Spirit of his Son into our hearts, prompting us to call out, “Abba, Father.”” He always wanted us, intended for us to be His, but He can’t break His own laws. He won’t be a “child-napper.” We have to come freely to Him. He already made the legal way through the shed blood of His Son.

When we choose Christ, we immediately are translated from the Kingdom of darkness into the Kingdom of Light. But, we may still have to get rid of some old thought patterns and some un-godly habits. When Satan was our father, we had his nature. John 8:44, (Weymouth New Testament) “The father whose sons you are is the Devil; and you desire to do what gives him pleasure.” Now that God is our Father, we should be demonstrating His nature. We should be reflecting God’s personality and character.

The hard part is that the devil still wants us. Not out of any love or loyalty, just to keep us away from God. He never had any love for us. He was ever an abusive parent, in every way, physically, mentally and verbally. If he seemingly did something we perceived as “good” at eh time- it was only a trick, a trap and a snare. We always paid for it in the end and the price continued to get higher and higher, until finally God Himself had to pay it for us. We lived in bondage. Not son’s but slaves.

In the Family of God, we have a wonderful, loving father. His thoughts toward us are good and not of evil (Jeremiah 29:11). In His Family, we are no more slaves, but Sons! We are “accepted in the beloved.” Our hearts are created new, clean, our minds are renewed. We have to destroy any thoughts that are against the nature of God, that don’t line up with His word. We have to “crucify” our flesh, all that junk that tried to come over with us into our new family.

We can’t ask God to take us, then keep boing back to our “old” family! There is no weekend visitations, no joint custody. We need to be fully His. Because if we aren’t fully His, then we aren’t His at all. You can only have one father. So…who’s your daddy?

I love the author, Tosca Lee and have read some of her other work. This book is great. I often have speculated on what it was like for Adam and Eve to just BE, and what became of them after they were expelled from the garden. Tosca Lee does a wonderful job of giving us a possible scenario. I wanted to love it, but it is overwhelmingly sad for me. Not the writing or even the story, but the whole fall of mankind thing. The book is one of hope, they do go on with life after all. Good fiction. I give it 4 stars.

God made it all, including you! Every speck, every square inch of matter. He spoke it all into existence. Why did He create it? For you! For me. He made everything that was made for a purpose and that purpose was love. I don’t pretend to know why He made some things (there are some nasty, creepy critters out there). And I do know that since the fall things have gone considerable downhill. I was pondering on all of this the other day and the enemy quoted scripture to me, “He said He made it all for His pleasure.” Same old lie from the Garden. Just as quickly the Holy Spirit replied, “True! It always pleases the Father to bless those He loves!” He finds pleasure in giving us everything. He gave us His Son. He gave us His Kingdom. What more could we ever want or need? What more could the world, or Satan ever do for us? They would both shed OUR blood, but never pour out their own! So look past the twisted, fallen state of things the way they are now under Satan’s rule, see the original beauty of creation. You can still see glimpses in the Rocky Mountains, the pictures sent back from Hubble, a baby’s smile, a flower, it’s there. Next time you see a sunset, a rainbow, pure white snow-covered landscape, thank Him for making it all for you.
How can we honor God and His gift? Walk in the authority and dominion that He gave us. Sure Adam sold out to the enemy, but Jesus paid a great price to purchase it, legally, back again! Then He left it to us as our inheritance when He died. He didn’t stop there; He rose again, and sent us His Spirit to give us the strength and to lead us on this path of victory. Don’t let Satan steel back what God has purchased! Take what God has given, with a thankful heart! It’s yours