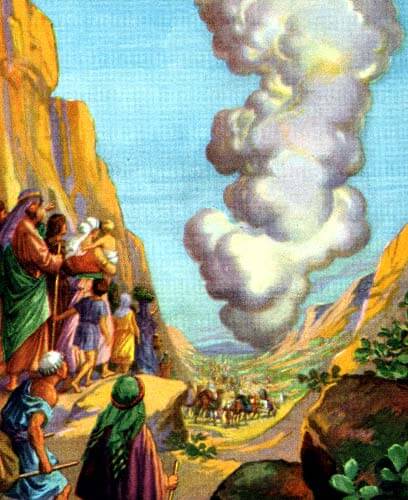 As the chosen ones of God traveled through the wilderness they only moved when God moved. They only camped when God stopped moving. They did this not for days, weeks, or months, but years. God was trying to teach them a valuable lesson.

What lesson?
God knows where and when we need to go. His way is always best.

They could have made that journey in eleven days. Eleven days! Forty years later, they were still following the cloud by day and the fire by night. You’d think after forty years of this they would have gone into the Promised Land and continued to be “followers of God.” Read the Old Testament and it becomes clear that they didn’t. They followed their own deceitful hearts, the people who they were warned about, false gods and pretty much everything but God. Thank God there were always some faithful few who stuck to the course, who learned the lesson.

What about us? Has God brought you through some wilderness times, only for you to stop following Him? Have you allowed the lies of the enemy, or the lust of your own flesh to lure you away? Has the world in all its momentary pleasures got you caught in its web?

Psalm 37:23 (ESV) says, “The steps of a man are established by the LORD, when he delights in his way; though he fall, he shall not be cast headlong, for the LORD upholds his hand.”
So maybe you got off the path. It’s only ever one step back to the Lord. Then you may stumble from time to time, maybe even fall. But fear not, God will uphold you.

I Corinthians 9:24 (NASB) “Do you not know that those who run in a race all run, but only one receives the prize? Run in such a way that you may win.”
It really isn’t important how fast you run, just that you finish, with honor. It is not something you can cheat at. You can’t pretend. You are either in the race or you aren’t. What is the prize?
Just the saving of our souls.
Eternal life.

So what about it? Will you move when He moves? Will you stop when He stops? Will you allow Him to show you the way?

His word is a light unto our paths and a lamp unto our feet. (Psalm 119:105). He knows the way. He made the path. Your steps are ordained. He even gave us the Holy Spirit to lead us along the way. Fix your eyes on the prize and run! When you are too tired to run, walk. When walking gets hard, crawl. Do whatever you have to do to move forward…towards Him.

One thought on “Move With God”