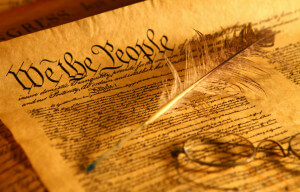 “When in the Course of human events, it becomes necessary for one people to dissolve the political bands which have connected them with another, and to assume among the powers of the earth, the separate and equal station to which the Laws of Nature and of Nature’s God entitle them, a decent respect to the opinions of mankind requires that they should declare the causes which impel them to the separation. We hold these truths to be self-evident, that all men are created equal, that they are endowed by their Creator with certain unalienable Rights, that among these are Life, Liberty and the pursuit of Happiness.”

“We the People of the United States, in Order to form a more perfect Union, establish Justice, insure domestic Tranquility, provide for the common defense, promote the general Welfare, and secure the Blessings of Liberty to ourselves and our Posterity, do ordain and establish this Constitution for the United States of America.”

If you are an American Citizen, you should recognize these two phrases. The first is the beginning of the Declaration of Independence. The second is the opening to the Constitution of the United States of America. I am proud of them both and the men who had the courage to draft them. Though they may not be popular today, and so many are trying to slander the men who wrote them, they are a testimony of a group of people who came out of tyranny into freedom. It may be hard for modern Americans to appreciate or understand either of these documents, but for Christians it should be easy. I use that word, “should”, because for most of us we don’t. There are many Americans who wouldn’t be able to identify either of these documents, and sadly even more Christians who don’t even understand that they have won freedom from the tyrant.

I guess I can’t really blame the Christians after all they don’t teach that kind of history at school, Biblical History. However, it’s time to educate ourselves! Here is a simple lesson.

Adam (and Eve) disobeyed God. From that day on mankind had lived under the tyranny of Satan. Each person born is born into sin, they have a sin nature and Satan is their ruler.

Romans 3:23 (Aramaic Bible in Plain English), “Because all of them have sinned and are deprived of the glory of God,”

It’s not my fault! I hear you thinking. Original sin may not be your fault, but what makes you so sure you wouldn’t have done the same thing, or sinned in a different way, sin is sin? You may have been born with that nature, but you don’t have to hang on to it. Keeping it is your choice. If you still have it, it is your fault. There is a way to change your nature; in fact you can be given a brand new one. God has made a way for you to live free. You don’t have to live under Satan’s tyranny any longer.

Shall we take another look at some of those verses in Romans 5?

Romans 5:15-21 (KJB), “But not as the offence, so also is the free gift. For if through the offence of one many be dead, much more the grace of God, and the gift by grace, which is by one man, Jesus Christ, hath abounded unto many. And not as it was by one that sinned, so is the gift: for the judgment was by one to condemnation, but the free gift is of many offences unto justification. For if by one man’s offence death reigned by one; much more they which receive abundance of grace and of the gift of righteousness shall reign in life by one, Jesus Christ.)Therefore as by the offence of one judgment came upon all men to condemnation; even so by the righteousness of one the free gift came upon all men unto justification of life. For as by one man’s disobedience many were made sinners, so by the obedience of one shall many be made righteous. Moreover the law entered, that the offence might abound. But where sin abounded, grace did much more abound: That as sin hath reigned unto death, even so might grace reign through righteousness unto eternal life by Jesus Christ our Lord.”

One man may have messed it all up, but One Man fixed it all. Yep, all. It’s finished. All you have to do is declare yourself free. Speak out your own “Declaration of Dependence”. Declare yourself dependent on God, on His plan of salvation for you, and Jesus’ work on the cross.

Then line yourself up with your new Constitution. What is that? Your Bible. It lists every right and responsibility that is yours as a citizen of Heaven. They are unalienable rights that have been endowed by your Creator. I know that is a very simple way of looking at Salvation. So what, it was never intended to be complicated. We complicate things. Look what we have done to the Constitution of the United States. Those founding fathers wouldn’t recognize it now either.

Let’s recap: once you were a slave to your flesh and under Satan’s rule. Christ died for you and now you have been made free. He has given you all authority to walk as a son of God. The only thing stopping you from doing that is you. Easier said than done? Maybe sometimes, but that won’t keep me from trying. My faith isn’t in me, it’s in Him. I may not be able, but He sure is.

I am free! So are you. If that doesn’t get you excited then nothing will.