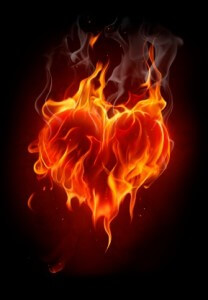 Daniel 5:5-12 (KJB),“In the same hour came forth fingers of a man’s hand, and wrote over against the candlestick upon the plaister of the wall of the king’s palace: and the king saw the part of the hand that wrote. Then the king’s countenance was changed, and his thoughts troubled him, so that the joints of his loins were loosed, and his knees smote one against another. The king cried aloud to bring in the astrologers, the Chaldeans, and the soothsayers. And the king spake, and said to the wise men of Babylon, Whosoever shall read this writing, and shew me the interpretation thereof, shall be clothed with scarlet, and have a chain of gold about his neck, and shall be the third ruler in the kingdom. Then came in all the king’s wise men: but they could not read the writing, nor make known to the king the interpretation thereof. Then was king Belshazzar greatly troubled, and his countenance was changed in him, and his lords were astonied. Now the queen, by reason of the words of the king and his lords, came into the banquet house: and the queen spake and said, O king, live for ever: let not thy thoughts trouble thee, nor let thy countenance be changed: There is a man in thy kingdom, in whom is the spirit of the holy gods; and in the days of thy father light and understanding and wisdom, like the wisdom of the gods, was found in him; whom the king Nebuchadnezzar thy father, the king, I say, thy father, made master of the magicians, astrologers, Chaldeans, and soothsayers; Forasmuch as an excellent spirit, and knowledge, and understanding, interpreting of dreams, and shewing of hard sentences, and dissolving of doubts, were found in the same Daniel, whom the king named Belteshazzar: now let Daniel be called, and he will shew the interpretation.”

Daniel, as a youth, had been taken captive and carried away to Babylon. He served under four foreign kings and under each one he was able to show the power of God. So strong was his convictions and so humble was Daniel that he was exalted to a place of power. In this section of Daniel we see that the holy vessels from the temple are being used by Nebuchadnezzar’s son, Belshazzar, in an unholy party. Out of pure boredom he orders the vessels to be brought to his guests. God finds nothing humorous in this situation and even until this day we use the phrase, “can’t you see the writing on the wall?”
His own so called wise men, using the dark powers, trickery, and false formulas could not read the writing. But, Belshazzar’s mother the queen remembers a man… a man who has an excellent spirit, knowledge, and understanding, a man who can interpret dreams and dissolve doubts. I love her words, when all hope is lost, “there is a man.”

Those were the same words that the little servant girl said to Naaman the commander who suffered from leprosy, in II Kings 5. She knew of a man (Elijah) who was so close to God that miracles happened when he was around.

I want to be so intimate with the Holy Spirit that the atmosphere, the environment around me is changed when I show up. I want people to notice, not me, but God in me.

Isn’t that why we are still here? We are supposed to be about our Father’s business, building His Kingdom. No matter what government we sit under, no matter if we are in our homeland or been relocated. Being under an oppressive government shouldn’t stop us. Look at all those saints in China who for years grew in numbers, illegally and exponentially. If our job was done, we’d already be in Heaven. Jesus finished His work and is there now preparing a place for us. We still have work to do. We can only accomplish it be being so in love with LOVE (God is love) and going where His Spirit leads.

Doesn’t it all set your heart on fire!

Luke 24:32 (NLT), “They said to each other, “Didn’t our hearts burn within us as he talked with us on the road and explained the Scriptures to us?”

Mark 16:17-18 (NIV), “These signs will accompany those who have believed: in My name they will cast out demons, they will speak with new tongues; they will pick up serpents, and if they drink any deadly poison, it will not hurt them; they will lay hands on the sick, and they will recover.”