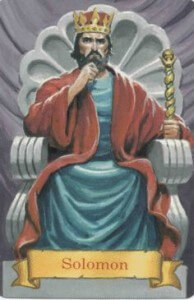 How many times have you heard someone say, “Practice what you preach”? I thought of that while reading through proverbs. Solomon didn’t do that!

Proverbs 1:2-9 (NIV), “For gaining wisdom and instruction; for understanding words of insight; for receiving instruction in prudent behavior, doing what is right and just and fair; for giving prudence to those who are simple, knowledge and discretion to the young- let the wise listen and add to their learning, and let the discerning get guidance—for understanding proverbs and parables, the sayings and riddles of the wise. The fear of the Lord is the beginning of knowledge, but fools despise wisdom and instruction. Listen, my son, to your father’s instruction and do not forsake your mother’s teaching. They are a garland to grace your head and a chain to adorn your neck.”

King Solomon spends verse after verse insisting that his son listens to his teaching, he grasps for wisdom and understanding, and then he gives chapters of wise sayings and warnings to anyone who will take heed. Solomon is written about in the Bible as the” wisest man that ever lived or ever will live”. (I Kings 3:12). So, what happened? We clearly see by reading Kings, Chronicles, and Ecclesiastes that somewhere along the way, Solomon stepped off the path. In fact he couldn’t have gotten any farther away. He built pagan altars, places of worship to false gods, and even worshipped them himself.) One of those false gods was Molech the god who demanded children be sacrificed in his ovens, I Kings 11.)

I can’t help thinking, “if he was so wise…what happened?”

Clearly “wisdom” isn’t the key to staying on track. If it had been, Solomon would never have turned his back on God, or ever left the path that God had laid out for him.

What do you think caused his backsliding?

We know that his many wives and concubines had something to do with it. The bible says, “Solomon married seven hundred princesses and also had three hundred concubines. They made him turn away from God, and by the time he was old they had led him into the worship of foreign gods. He was not faithful to the Lord his God, as his father David had been.” (I Kings 11:3-4) It is easy to put the blame on all of those women, but let’s dig a little deeper here.

Why did Solomon marry so many “Princesses”?

He was trying to broker peace with other nations. It was s common practice in the day to form alliances through marriage. The thinking was that rival kings wouldn’t attack if their daughters were married to and living in the palace of the king. God had already told Solomon that he reign would be a peaceful one. God had planned it all out and His plan didn’t include hundreds of women! Solomon was trying to work out something God wanted to give him. Does that sound familiar? Think of Sarah and Abraham, or Adam in the garden, and what about Satan’s temptation of Jesus (to give Him something by means of another way instead of by God’s will.)

After turning his back on God, Solomon tries everything to find meaning in life. Instead he finds that it is all vanity!

Ecclesiastes 1:2-8 (NIV), “ Meaningless! Meaningless!” says the Teacher. “Utterly meaningless! Everything is meaningless.” What do people gain from all their labors at which they toil under the sun? Generations come and generations go, but the earth remains forever. The sun rises and the sun sets, and hurries back to where it rises. The wind blows to the south and turns to the north; round and round it goes, ever returning on its course. All streams flow into the sea, yet the sea is never full. To the place the streams come from, there they return again. All things are wearisome, more than one can say.”

These verses sound like someone in the throes of depression. If you read through Ecclesiastes you will see he tried everything, work, leisure, pleasure, and even turned himself over to false religions and idol worship, yet found no meaning in life. All the wasted time, the wasted life, and the ruin of a whole nation! All he had to do was repent (turn back to God).

Compare his lamenting in verses 2-8, to the scripture in Isaiah. Isaiah states that he had not been disgraced, or put to shame. He set his face like stone, keeping his eyes and his focus on God. Maybe that is why he had such a great revelation of Jesus. Yet, Solomon’s life is full of shame and disgrace, so much that his sin caused the kingdom to be divided, leaving a legacy of selfish, hard-hearted, kings in his wake.

In all of the warning he gave his sons, and us, through proverbs, he didn’t practice what he preached.

We know that at some point he came to his senses. We can read in the last chapter of Ecclesiasts, “ Now all has been heard; here is the conclusion of the matter: Fear God and keep his commandments, for this is the duty of all mankind. For God will bring every deed into judgment, including every hidden thing, whether it is good or evil.”

He realized his mistake, yet he couldn’t undo the evil influence that he propagated to the people of Israel, or his own children. God had made it plain what would happen if Solomon or his children didn’t do all that He had commanded. The die was cast and there was no taking it back. Sadly for Solomon and Israel, it was “too little, too late”.

Thankfully, we live in God’s glorious grace! It’s never too late for us to return to our first love. Any move to gain more intimacy with God is never too little.

Set your face like flint! Don’t let anyone pull you away from your relationship with God. Make Him number one.