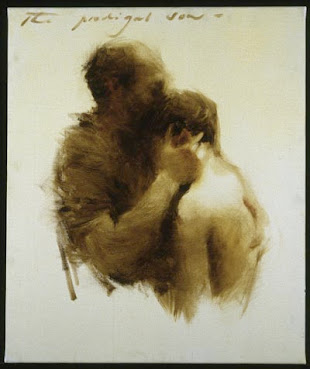 Luke 15:20 (Berean Study Bible), “ So he got up and went to his father. But while he was still in the distance, his father saw him and was filled with compassion. He ran to his son, embraced him, and kissed him.”

In Luke 15 we can read about a man that had two sons. The younger wanted his share of the inheritance before his father had passed. This can tell us a lot about this young man. Normally an inheritance isn’t given until there is a death. In those days the oldest son got a double portion and it is possible he resented this. People who dream of getting their inheritance early usually dream about losing the person early. But this man begs his dad to give it to him now. He was tired of working his father’s land, he was tired of being the second son, and he obviously didn’t respect his father.

The father, in his love, gives the son all that is due him. What does this selfish son do? He leaves everything behind, the work, the family, his social standing, his home. Then he proceeds to fulfill every lust of his flesh. When you have a lot of money, people suddenly want to be your friend. When you are “paying for the next round” or drive the fancy car with all the bells and whistles, when you throw your money around like it will never run out, people use you.

Before long, this young man who was always provided for, who had a family and a home, had an inheritance waiting, had absolutely nothing, and because he had run so far from it all, he found himself alone and starving.

Good thing he finally “came to his senses”. He remembers how good it was back home, he thinks about how his father even treated the servants pretty darn good. It took all of this for him to realize dad wasn’t such a bad guy after all, and his life was a whole lot better than it was at the end of the rope. He began to miss his old life and says to himself:

“ I will get up and go back to my father and say to him, “Father, I have sinned against heaven and against you. I am no longer worthy to be called your son. Make me like one of your hired servants.”’ (Luke 15:18-19)

Then while he was way down the driveway his father sees him. That means dad’s been watching and he can recognize this son he loves from even very far away. Does he wait for the prodigal to come to him with his tail between his legs, rehearsing the “did you learn your lesson” speech? Nope, he runs to his son and kisses his neck. To this father, it’s like his son had returned from the dead.

What a love. I want that kind of father, don’t you? Well, it’s time we “came to our senses” as well. We have that Father. He recognizes us better than anyone, He is looking for us to come up the drive, He is ready to give us a party in Heaven. He loves us no matter how we have behaved, disrespected, and squandered what He has already given us. He loves you!