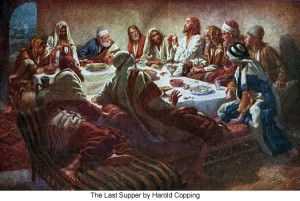 Luke 22:14-16 (NIV), “When the hour came, Jesus and his apostles reclined at the table. And he said to them, “I have eagerly desired to eat this Passover with you before I suffer. For I tell you, I will not eat it again until it finds fulfillment in the kingdom of God.”

It’s Jesus’ last Passover meal with His followers. He knows that His hour has come. He tells the twelve to “eat His body and drink His blood,” and almost as an afterthought, “But the hand of him who is going to betray me is with mine on the table.” He, again, explains to them that “He must die”. Of course they spend the next few minutes asking each other, “who would do such a thing?” Then suddenly they are arguing over who will be the greatest. (v. 24)

Then Jesus takes the time to warn one particular disciple.

Luke 22:31-34 (NASB), “Simon, Simon, behold, Satan demanded to have you, that he might sift you like wheat, but I have prayed for you that your faith may not fail. And when you have turned again, strengthen your brothers.” Peter said to him, “Lord, I am ready to go with you both to prison and to death.” Jesus said, “I tell you, Peter, the rooster will not crow this day, until you deny three times that you know me.”

I think Jesus uses Peter’s given name to point out a weakness in him. Peter, a rock, is going to be sifted, shaken. Yet there is hope for Peter, for Jesus has pleaded in prayer for His friend. Jesus knows Peter will deny Him, but He encourages Peter to “repent and then, strengthen your brothers.”

Romans 8:1-3 (KJB), “ There is therefore now no condemnation to them which are in Christ Jesus, who walk not after the flesh, but after the Spirit. For the law of the Spirit of life in Christ Jesus hath made me free from the law of sin and death. For what the law could not do, in that it was weak through the flesh, God sending his own Son in the likeness of sinful flesh, and for sin, condemned sin in the flesh:”

It is like a family who live a rough life, barely scraping by, sitting down to the last food in their cupboards. They are grateful for the watery bowl of ramen and a small cup of kool-aid before retiring for the night, only to wake up and find out that they are long lost cousins to the king. Suddenly they are royalty and are swept off to the palace to dine every night at the king’s table. They had eaten their “last supper” as peasants, in their old life, and now they feast with the king in their new life.

We would think them pretty foolish if they kept eating ramen noodle and drinking kool-aid for supper, wouldn’t we?

Then isn’t it foolish for us to still be arguing over who is the greatest, or trying to stand up to Satan and his “sifting” in our own strength? Why do we want to still submit to the law of performance, or worse yet try to force others to, when we have eaten our last supper there? We are royalty! We are kings and priests. We are children of God. We are seated in Heaven with Christ. We need to stop living under the Old Covenant and live under the New! It’s easier said than done, I know… but we need to repent.

We will never change anything (that’s what repent means, changing our direction) until we change the way we think.

They say it takes fourteen days to build a new habit. However, you won’t even try until you make up your mind to do something different than what you have been doing.

The night before you surrendered your heart to Jesus- you ate your “last supper.” It’s all brand new from there.