Hebrews 11:6 (NIV), “ And without faith it is impossible to please God, because anyone who comes to him must believe that he exists and that he rewards those who earnestly seek him.”

God rewards us. Pretty cool huh? There are many actions and activities that He rewards. There is a prize at the end of the race (Phil 3:14), a crown for those who persevere (James 1:12), perfect peace for those who set their minds on Him (Isaiah 26:3), and I could keep going. But according to Matthew we can either store up treasures here on earth or we can store up treasures in heaven.

Jesus was probably talking about worldly goods here, because rust, moths, and thieves take these kinds of things away from us. However, I don’t think it would be stretching this scripture to include recognition of men, or self aggrandizement because if we continue to read on in Matthew, Jesus warns us of doing just that.

Did you catch what kind of reward we get for wanting to “be seen of men”? Oh, there is still a reward; it’s the recognition of men. That reward lasts for a season, it is fleeting, fame is fickle. The fifteen minutes of fame that people used to talk about has now turned into fifteen seconds. The media has overloaded us with information on so-called famous people and their deeds. Millions watch “reality” tv to see every detail of someone’s life, the good, the bad, and most of the time the ugly. “I don’t want that kind of fame”, you say. Do you want the people in your life to know about all your good deeds? Do you spend more time talking about what you do than what God did through you? Do you only volunteer for the jobs that you can be seen doing? At work, do you have to take credit for everything you do above and beyond the call? At school, do you need to be the center of attention all of the time? Same thing. You may think that is a great reward, but it never lasts. Why? Because we may look good one day, then mess up the next. That perfect “hair day” is called a day for a reason.

What’s worse is that most people can’t handle being around someone like that. Those seeking fame, recognition and acceptance through their actions may write it off as jealousy, but I assure you that isn’t what it is. There is just something about a person who is so insecure, or so puffed up that they have to be in the spotlight, that turns our stomachs. On the other hand when we find out someone did something behind the scenes, whether it is simple or grand, we feel good about that. It touches our hearts. They did it because it needed done. They were motivated by love not by recognition. Sometimes they may have done it as simple obedience to God and His word. They may have had to grit their teeth and do it. It isn’t always fun cleaning toilets or dealing with hard situations, but obedience is better than sacrifice.

In Matthew, Jesus promises us that when we do our good deeds in secret that the Father rewards us openly. One day someone is going to say, “Let’s thank so and so for all they have done,” and more than likely that person will blush and be embarrassed, or maybe grin like it’s their birthday and give God the glory.

There is always something to do. We are called to do good works, and there will be rewards.

Ephesians 2:10 (NIV), “For we are God’s handiwork, created in Christ Jesus to do good works, which God prepared in advance for us to do.”

There are two kinds of rewards: eternal or temporal. One lasts forever, the other is only temporary, fleeting.

What kind of reward do you want? 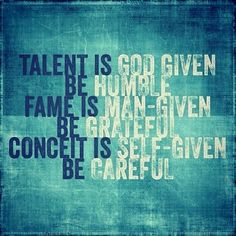 It is nice to be honored, isn’t it? In America we like to watch awards shows where they honor actors, singers, athletes and more. We have honorary college degrees, employee of the month, customer of the day, and much more. When we get a good review at work and a raise, it feels nice. As a whole we tend to think of recognition as honor, but they are two different things. Recognition means just that, you have been recognized, identified, or remembered. Picture yourself walking down the street and you hear someone call your name, you were recognized by someone. Honor includes respect, esteem, and recognition. Bonnie and Clyde received recognition, Mother Theresa received honor. So why does it seem that some receive honor and others do not. Two people can do the same job at work, with the same production, yet not receive the same reward? The Biblical answer to that is that only the humble can receive honor.

Proverbs 29:23 (NASB), “A man’s pride will bring him low, But a humble spirit will obtain honor.”

Proverbs 18:12 (Holman Christian Standard Bible), “Before his downfall a man’s heart is proud, but humility comes before honor.”

Any one of us can go around “tooting our own horn” and bragging about all of our accomplishments. We could corner our bosses and demand recognition and a raise for our hard work. We could take out a front page ad to display our talents and gifts to gain fame. However, true honor, honor that hasn’t been forced or manipulated, only comes to those who are humble.

If your work, your effort, and the application of your God given gifts and talents are all used just so that you can gain recognition, then that is your reward. So, you better be happy with the recognition of men. If you want honor, which is so different than simple recognition, you better be operating out of a completely different motivation. The man who works hard on his job because he knows that his boss expects it, because he acknowledges that he is on the time clock and being paid for his time, and because he wants to represent the Kingdom well, will receive true honor. The person who uses their artistic talent to glorify God and to support their family will receive honor. The artist, who uses their talent to glorify themselves, or a certain lifestyle, may win awards, and gain recognition, but they will never have honor. It’s so easy to see the motivation in other people, sometimes harder to see it in ourselves.

We tend to want to point the finger at others and say their effort isn’t good enough, or their motivation is not right, but we want them to honor us for every little thing that we do.
Jonathan Edwards said it this way, “Some persons are always ready to level those above them down to themselves, while they are never willing to level those below them up to their own position. But he that is under the influence of true humility will avoid both these extremes. On the one hand, he will be willing that all should rise just so far as their diligence and worth of character entitle them to; and on the other hand, he will be willing that his superiors should be known and acknowledged in their place, and have rendered to them all the honors that are their due.”

Honor should never be sought after. It is earned by being humbly obedient to those in authority over us, and doing whatever our hands find to do as unto the Lord. We do our best because it is the right thing to do, because this honors God, and God will make sure that we are honored. If you feel cheated of honor, examine your heart! That is pride speaking. God will never bypass the chance to honor those who deserve it. He said in Romans 13:7, to give honor where honor is due. He doesn’t ask us to do something that He won’t do. He honors those who have a contrite spirit, a repentant heart. Pride is sin and clearly indicates a heart that has not humbled itself.

Isaiah 66:2 (NKJB), “Heaven is My throne, And earth is My footstool. Where is the house that you will build Me? And where is the place of My rest? For all those things My hand has made, And all those things exist,” Says the LORD.“But on this one will I look: On him who is poor and of a contrite spirit, And who trembles at My word.”

James 4:6,10 (NIV), “But he gives us more grace. That is why Scripture says: “God opposes the proud but shows favor to the humble…Humble yourselves before the Lord, and he will lift you up.”

So, this all may go against our flesh, but most good things do! We have to humble ourselves. It doesn’t matter if you ever get recognized for your hard work at your job, at Church, or at home, just work hard. Do your job cheerfully and with a good attitude. Use your talents and gifts to help others, and not just yourself, to glorify God. Don’t worry if anyone is watching or takes notice. God sees. His rewards will be so much better than the recognition of man.

Matthew 6:1 (Message Bible), “Be especially careful when you are trying to be good so that you don’t make a performance out of it. It might be good theater, but the God who made you won’t be applauding.”