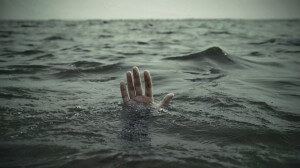 My daughter has a friend and that woman has three beautiful children. When her oldest boy was still a toddler they came to stay with my daughter. At naptime little Liam did not want to take a nap. His patient father was trying to get the little guy down while the girls visited. Here is the conversation that was related back to me after this incident.

Now to the consternation of his Daddy, everyone else in the house thought this was hilarious. I thought it was very cute, especially such a little guy who uses such grown up terms. He is rather a smart boy.

What does that have to do with sinking or swimming?

At our Praise and Prayer service last night, God showed me a picture of a great ocean with people everywhere. There was a storm and the waves were rolling. Some of those people were treading water, barely keeping their chins up, and sometimes bobbing under for a few scary moments. Others had simply given up the fight and were allowing themselves to sink to the peaceful bottom, far away from the storm. Those didn’t make it.

I asked God what it meant and He showed me that the storm tossed waters represented this world we live in, one storm after another. The people represented both the lost and the saved. Those that were swimming were still trying to keep themselves alive. Those that were sinking had given up the fight and surrendered to this world. I thought of the obvious question, would I sink or swim. Immediately I thought, “swim.” But God said, “I have not called you to sink or to swim! I have called you to be a life preserver.” Like Liam, God wanted me to say “neither.” Ok, so Liam may have been a cute rebellious toddler, but our choice to neither sink nor swim doesn’t come from rebellion, but out of trust.

Of course God in His mercy showed it to me this way. Those who are treading water, waiting for someone to rescue them didn’t realize they had already been saved. There ought not to have been any Christians in that predicament as we should be quite aware of the fact that we have been saved already! The sinkers represented those saved and unsaved who just plain grew weary of the fight. Those who were saved had allowed the cares of this world to overtake them. (Our Senior Pastor, after I gave this word to the congregation, added to this by saying that those treading water also represented those who were trying to do it all in their own strength. Instead of the Grace of God, they were trying to do make it on their own merit and labor.)

Jesus walked on the water, during a storm. Peter had the faith to step out of the boat and as long as he kept his eyes on Jesus, he too walked on the water. That is what God has called us to do. Not bob around like a floating device, waiting for someone to grab a hold of us, but to live above the storm tossed waves, to walk on the water and pull them up and out of the storms. How do we do that? First of all we can’t choose sinking or swimming. We have to renew ourselves in the word, press into the loving arms of the Father, and allow Him to change us and use us. We don’t have to be perfect for him to use us; we just have to be willing. However, we can’t save those drowning if we are clinging to them in the water.

Those that are drowning have no regard for life, but their own. In great panic they tend to try to get themselves up out of the waves by crawling up and over their would be saviors. Ask anyone who has gone through lifeguard training. Sometimes they have to literally knock someone out to get them both to safety. So it is a must that we realize that we are not drowning. Jesus has already pulled called us to the surface, set us on our feet, and taught us how to say “peace” to the storms. Once we have accepted that, put our trust in Him, we stop trying to do it in our strength, by our work. It’s a different kind of surrender. Not the “I’ll just sink down where it is cold and calm, and let the fighting be over,” but it is a “I can’t do it on my own, I need Him.”

Then we can show others the way. Those who don’t know Him, need to be introduced. Those who do, but are still living under their own works, need to be shown how to be led by the Holy Spirit, how to enter into the rest of God, how to give up in a good way.

Romans 8:12-17 (The Message Bible), “So don’t you see that we don’t owe this old do-it-yourself life one red cent. There’s nothing in it for us, nothing at all. The best thing to do is give it a decent burial and get on with your new life. God’s Spirit beckons. There are things to do and places to go! This resurrection life you received from God is not a timid, grave-tending life. It’s adventurously expectant, greeting God with a childlike “What’s next, Papa?” God’s Spirit touches our spirits and confirms who we really are. We know who he is, and we know who we are: Father and children. And we know we are going to get what’s coming to us—an unbelievable inheritance! We go through exactly what Christ goes through. If we go through the hard times with him, then we’re certainly going to go through the good times with him!”

So what will it be? Sink or swim?