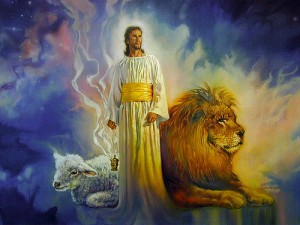 The world has issues with who God really is and to be perfectly honest so do a lot a Christians. Sometimes I have to be reminded. We look at the Old Testament and see a God who wiped out whole nations, every man, woman, child, and even their animals. Then we turn to the New Testament and read that “God is Love.”
Is He a lion or a lamb? Is He Master and Ruler, or Servant of all? Is He a vengeful God, or forgiving Savior? Is He so Pure and Holy that He can’t bear to be around sin, or did He pour out His blood to get rid of our sin? The answer to all of these paradoxes is YES! Does it make sense? No, but the wonderful thing about God is that He doesn’t have to make sense. He is God after all. His ways are not our ways and His thoughts are not our thoughts.

So how do we reconcile the God that sent the flood, and Jesus who died for our sins?
Let me first explain one thing you need to know about God. He is Love. No matter what He does, even wiping the human race off the face of the planet, minus the eight He saved, was motivated out of love. Think about this for a minute…what if He would have allowed the human race to continue? There was only one person that God said was righteous. Yes, his whole family was saved, but we don’t know if that was because the shared Noah’s obedience to God, or if it was just God’s mercy and love for Noah. How long do you think it would have taken for there to not be a single faithful follower? God, in His love for His creation, took action while there was still one. Think of Sodom. God would have allowed it to remain if there would have been even five faithful! Evil is like a cancer, it is caused by Satan, and then accepted and propagates in the flesh of men. You can’t cut out part of cancer, you can’t leave just a small cancer cell, you have to do radical surgery and cut it out. That’s what God’s cleansing did.

Through His love and patience, a remnant always remained. Noah and his family, Lot and his daughters, the poor and week who were left in Israel after the enemy took everyone of import captive (after killing thousands). Always, He honored His promise to the founding fathers. For David’s sake, He always made sure to leave an heir. When His own chosen people demanded a king, and the majority of those kings led His people into idol worshipping, even sacrificing their own children, God’s hand, as a loving parent, was forced to discipline His children. Talk about tough love. Don’t ever think it didn’t grieve Him. He lamented over the loss of those He loved. We think we have to make hard choices.

God is the same. Who He was in the Old Testament is still who He is now. He lives outside of time. There is no yesterday for Him. Yesterday, today, and tomorrow are all right now for God. The only difference is that we, who live in time, are in a different state. We live under grace, not under law. Jesus’ shed blood gives us the choice of eternity of Heaven or hell. Just as each new king had the choice to follow after God, or to lead the people in rebellion. We live in the Church age, aren’t you glad, but soon, just as in the Old Testament, God will not spare the world any longer. He will gather up those that are His, and once again, the God who is Just and Holy will deal with evil in this world, once and for all. There will be no more mercy and grace, no “one more chance.”

Isaiah 26:21 (NIV), “See, the LORD is coming out of his dwelling to punish the people of the earth for their sins. The earth will disclose the blood shed on it; the earth will conceal its slain no longer.”

Revelation 19:11-21 (ESV), “Then I saw heaven opened, and behold, a white horse! The one sitting on it is called Faithful and True, and in righteousness he judges and makes war. His eyes are like a flame of fire, and on his head are many diadems, and he has a name written that no one knows but himself. He is clothed in a robe dipped in blood, and the name by which he is called is The Word of God. And the armies of heaven, arrayed in fine linen, white and pure, were following him on white horses. From his mouth comes a sharp sword with which to strike down the nations, and he will rule them with a rod of iron. He will tread the winepress of the fury of the wrath of God the Almighty.”

Time is winding up like a scroll. Soon and very soon, you will see Jesus coming in the clouds and the Holy Spirit will usher us out of here (if you follow Jesus). Will you be like James and John and ask God to call down fire on the rebellious? Or will you be like Abraham who reasoned with God for Sodom, or like Moses and Aaron who pled for the rebellious group they led, or maybe you will be like Amos who lamented over the loss of the house of Jacob and begged God?

Do I want Jesus to come back soon? You betcha’! However, I also want to reach as many as possible before that great and terrible day. The finality of “the end” should motivate us! There will be no more grace, no mercy, no more chances for those who have refused Him. Those that are His will spend eternity with Him in the light of His love. Those who are not His will spend eternity in the dark, no God, no love, no light, and no hope. No because God is cruel, but because they chose.

He is Love, He is Just, He is a strong Daddy who takes care of His children. He knows what’s best for each and every person and every decision He makes is for the best!

Can you help them find their way to Him?